Iberdrola and Fertiberia place Spain at the forefront of green hydrogen in Europe, with 800 MW and €1.8 billion investment projected by 2027

Iberdrola and Fertiberia place Spain at the forefront of green hydrogen in Europe, with 800 MW and €1.8 billion investment projected by 2027 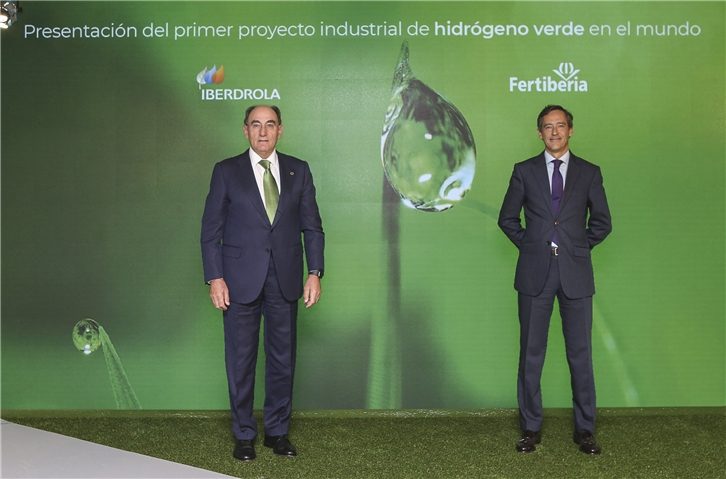 The Green hydrogen industry has been boosted with a new alliance between Iberdrola and Fertiberia, which seeks to turn Spain into an industrial leader of a technology that will be fundamental to delivering climate neutrality. The partnership could see the installation of 800 MW of green hydrogen production capacity, with € 1.8 billion investment over seven years.

In the next year the partners will commission their first plant in Puertollano, becoming Europe’s largest green hydrogen complex for industrial use. The innovative partnership includes plans to develop three additional projects between 2023 and 2027, in the Fertiberia plants of Puertollano (Ciudad Real) and Palos de la Frontera (Huelva) which could deliver 40 times the capacity of the first plant.

This morning’s announcement was made by Ignacio Galán, Chairman of Iberdrola, and Javier Goñi, Chairman of Fertiberia. “This great project that could turn Spain into the first country to obtain 100% of its ammonia production from green energy sources.” The project is the result of an alliance “which puts both companies’ capabilities at the disposal of an unprecedented transformation process”, said Galán. “An alliance that is not based on mere intentions, but on concrete actions. Once again, we are pioneering the implementation of a new clean technology, green hydrogen, and we are doing it together with the best partner, Fertiberia,” he added.

Galán highlighted the European Union’s green hydrogen strategy. “These are ambitious plans that aim to put Europe at the top of the world league of this technology,” said the Chairman of Iberdrola, “and they require industrial companies willing to face up to the transformation of their production processes; a supply chain ready to fabricate the infrastructure for electrolysis on a large scale, with increasingly efficient and competitive equipment- The ambitions need companies with sufficient investment and execution capacity to generate and supply the required capacity of green energy; and support from the European Union to make these projects a reality”.

Javier Goñi explained that the alliance with Iberdrola makes Fertiberia “the first company in the industry that feeds its large plants with green hydrogen, thanks to local renewable sources that will also supply our electricity consumption needs”. This project also allows Fertiberia to “show the way forward to the rest of the operators”. With this “strategic and decisive” step, fertilizers will be manufactured with a high level of effectiveness and environmental efficiency, reducing greenhouse gas emissions, as required by the future Common Agricultural Policy. “More than 50% of our turnover already comes from high added value products, a percentage that will exceed 60% in 2023”, highlighted Goñi, for whom the agreement with a European energy champion like Iberdrola “helps to promote the Spain brand as an international symbol of innovation and technological leadership”.

Iberdrola’s comprehensive project places the group at the forefront of the new technological challenge posed by the production and supply of hydrogen from 100% renewable sources.

The plan would deliver 800 MW of electrolysis, equivalent to 20% of Spain´s national target – which envisages the installation of 4GW by 2030 – and would ensure that around 25% of the hydrogen currently consumed in Spain is emissions free. “Our green hydrogen plan is a project linked to green investment, which avoids the emission of more than 400,000 tons of CO2 into the atmosphere and helps to achieve climate neutrality”, explained Galán.

These projects would contribute to the development of the entire value chain, creating almost 4,000 qualified jobs – 2,000 of them by 2023 – through 500 local suppliers.

The plan will invigorate an industrial hub with high growth potential, such as the manufacturing of electrolyzers in Spain. It reduces energy dependence and consumption of fossil fuels while promoting economic and social development, particularly in regions that face economic challenges such as Castile-La Mancha and Andalusia.

As well as contributing to the reactivation of industry and the economy, the innovative proposal also includes positioning Spain as a technological benchmark in the production and use of green hydrogen in Europe, especially in the field of electrolysis.

The investment would contribute to advancing the technological maturity of green hydrogen and turning it into a solution for efficient decarbonization in the medium term, both for industries that use it as a raw material and for processes that are difficult to electrify, such as heavy transport.

The project is the result of private and public collaboration, born with the same ambition that the Spanish Government has shown in its Green Hydrogen Roadmap. For the implementation of the last three phases, support from the European Recovery Fund would be required. “To get out of this crisis we need concrete initiatives, which allow us to advance in the much-needed green recovery”, explained Galán. In this sense, the Chairman of Iberdrola has expressed his wish that “this project receives the necessary state and European support to get it up and running and, thus, position Spain and Europe at the vanguard of a new technology that is essential for decarbonization, leading the way to its full commercial competitiveness”.

In 2021, Europe’s largest green hydrogen complex for industrial use will be operational in Puertollano, following investment of €150 million. The complex will comprise a 100-MW solar photovoltaic plant, a lithium-ion battery system with a storage capacity of 20 MWh and one of the largest systems for producing hydrogen by electrolysis (20 MW). Its development and construction will generate 700 jobs. Once operational, it will prevent the emission of 39,000 tCO2/year.

Iberdrola is accelerating the construction of this innovation project and, in addition, has already submitted an application to the Innovation Fund for European aid.

The green hydrogen produced will be used in the Fertiberia ammonia plant in Puertollano. The plant is already one of the most efficient in the European Union, with a production capacity of over 200,000 t/year. Fertiberia will adapt its plant to the use of green hydrogen for manufacturing green fertilizers, reducing the needs of natural gas in the plant by more than 10%. It will be the first European company in the sector to develop a large-scale experience in the generation of green ammonia.

The plant is being built in a privileged location, an important industrial hub which includes the National Center of Hydrogen that advised both companies during the process.

Spain and the European Union are making progress in the electrification of their economies to achieve full decarbonization. The contribution of electricity to energy consumption today barely exceeds 20% of the total and should grow three-fold in just 30 years if climate objectives are to be met.

In parallel, there are some energy uses that, for technological reasons, are difficult to electrify. This is the case of high temperature industrial processes and heavy transport. For those, the production of green hydrogen from electrolysis – using renewable energy – is a key factor in the path towards climate neutrality in 2050.

Aware of this challenge, but also of this great opportunity, the European Union and the Government of Spain have launched strategies to promote green hydrogen. The EU aims to have 40 GW of green hydrogen electrolyzers in just ten years, while in Spain the goal is 4 GW of installed capacity.

​Cardno announces the opening of a new office in Western Sydney, NSW, Australia