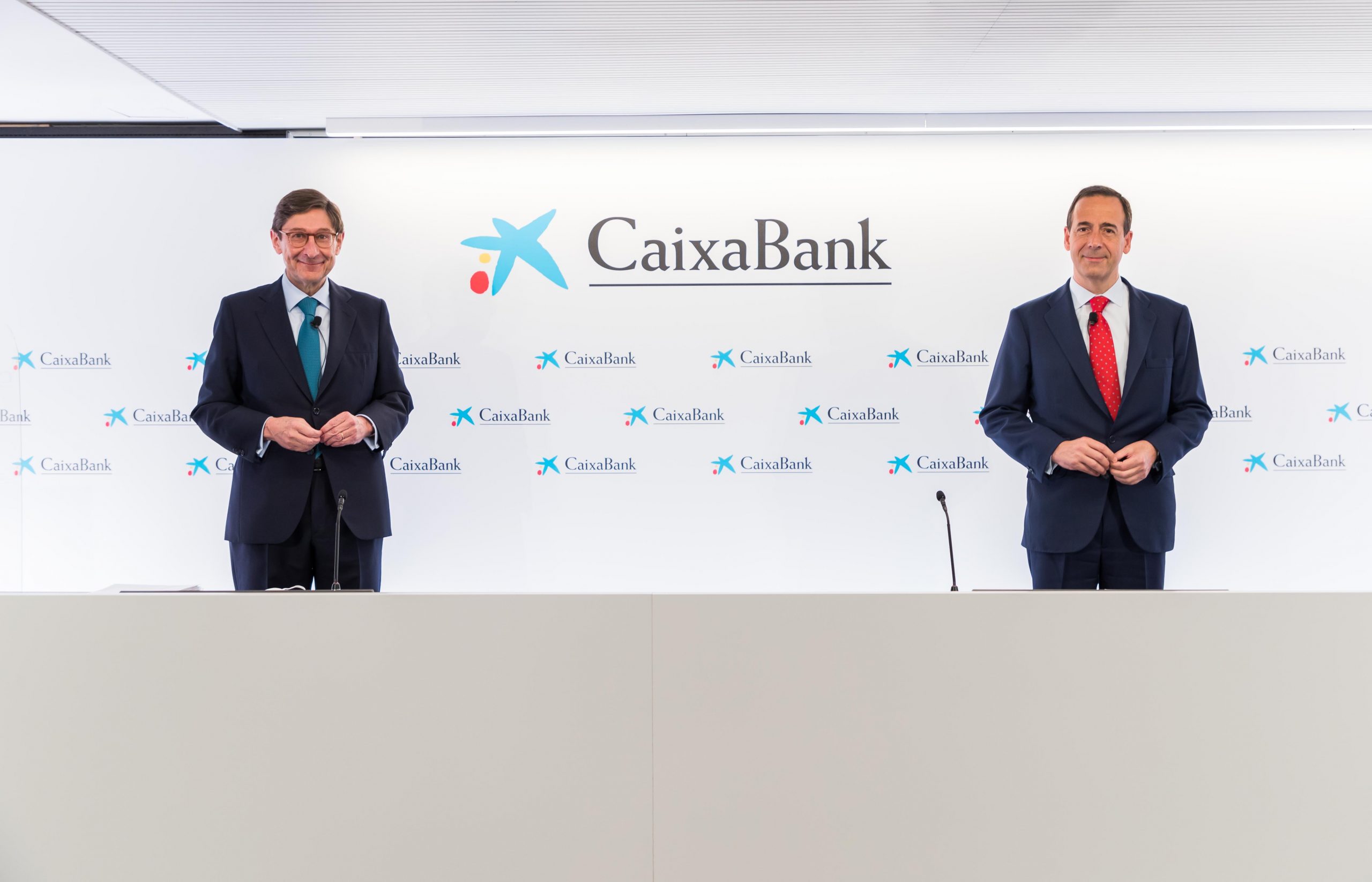 CaixaBank will have close to 20 million customers and €623.8 billion in total assets, becoming the leading bank in Spain, with a market share in loans and deposits of 26% and 24%, respectively, and a diversified and balanced geographic presence.

• Bankia shares will cease trading on 26 March at close of market and the new CaixaBank shares issued as a result of the merger will begin trading on 29 March.

• José Ignacio Goirigolzarri will become executive chairman of the bank once he is appointed by CaixaBank’s new Board of Directors, which is scheduled to meet in the next few days.

• José Ignacio Goirigolzarri: “The merger between CaixaBank and Bankia marks a milestone in the history of the Spanish financial system. We face this challenge from a position of strength that allows us to be an active part of the solution to the current crisis, as well as to become an important stakeholder for the socio-economic recovery of our country”.

• The current CEO, Gonzalo Gortázar, will continue as CaixaBank’s chief executive and will oversee the Management Committee.

• Gonzalo Gortázar: “A transformational operation like this is necessary to adapt to a new environment in which conditions have changed as a result of technological disruption and the macroeconomic environment. We are moving ahead so we can continue to be a key player in supporting families and businesses”.

CaixaBank, Spain’s leading bank, has today completed the legal formalities of the merger with Bankia, following the registration of the merger deed with the Commercial Registry. The deal, which involved the creation of the leading entity in the Spanish financial sector, was approved by a large majority at the Extraordinary General Shareholders’ Meetings of both CaixaBank and Bankia last December and has obtained all the corresponding authorisations.

The operation thus complies with the timetable established last September to complete the legal merger in the first quarter of 2021 and maintains the objective of completing the operational integration of the two entities before the end of 2021.

CaixaBank, a key organisation in supporting the economy

CaixaBank’s chairman, José Ignacio Goirigolzarri, pending his appointment by the Board of Directors in the coming days, and the CEO, Gonzalo Gortázar, have said that the bank’s objective is to continue to be a key player in supporting families and companies, and to become an important contributor to the socio-economic recovery of our country.

For Goirigolzarri, “the merger between CaixaBank and Bankia marks a milestone in the history of the Spanish financial system; a project that we are taking on with tremendous enthusiasm, while remaining aware that overcoming the challenges that lie ahead will be no minor feat”. In this regard, Goirigolzarri added that, “we face this challenge from a position of strength that allows us to be an active part of the solution to the current crisis and, above all, to be the organisation that is closest to our customers and to society”.

For his part, Gortázar stressed that, “the merger of CaixaBank and Bankia makes us the undisputed leader in the financial sector in Spain. A leadership that we will continue to place at the service of our customers and of society as a whole, in line with our foundational origins and our social commitment”. According to Gortázar, “a transformational operation like this is necessary to adapt to a new environment in which conditions have changed as a result of technological disruption and the macroeconomic environment”.

Creation of the undisputed leader in Spain’s financial sector

CaixaBank will have close to 20 million customers in Spain and €623.8 billion in total assets, a volume that will make it the largest bank in the domestic market, with a relevant position at a European level, and a market capitalisation of more than €20.5 billion.

CaixaBank will also consolidate its leadership in retail banking in Spain, occupying the number one position in terms of market share in all key products: deposits (24%), loans (26%) and long-term savings (29%), which includes savings insurance, mutual funds and pension plans.

The bank offers a balanced and diversified geographical presence, with the most extensive and specialised branch network in the sector, and aims to maintain a commitment to the community and to financial inclusion that CaixaBank and Bankia have always demonstrated. The combined entity will have a presence in approximately 2,200 municipalities, and it will be the only entity with representation in 299 municipalities.

The extent of the network’s penetration together with its digital capabilities – with 10 million digital customers in Spain – will allow it to continue to improve customer experience.

CaixaBank’s new shares will be listed on 29 March

On 17 September 2020, the Boards of Directors of both banks approved the exchange ratio of 0.6845 new ordinary CaixaBank shares for each Bankia share. The agreed price includes a 20% premium on the exchange ratio at the close of trading on 3 September, before the market was informed of the negotiations around the proposed transaction. In addition, it represents a 28% premium over the average exchange ratio in the three months prior to the announcement.

Considering the total number of outstanding Bankia shares that could participate in the exchange, the maximum number of CaixaBank shares to be issued to meet the merger exchange amounts to 2,079,209,002 ordinary CaixaBank shares with a nominal value of one euro each.

Bankia shares will cease trading on 26 March at market closing time and the new CaixaBank shares issued as a result of the merger will begin to trade on 29 March. The new shares will give their holders the same rights as the rest of CaixaBank’s shareholders.

Customers will not be required to make any arrangements

Despite the legal closing, which was completed today, customer operations will remain virtually unchanged until the migration of each institution’s operating platform, a process which is expected to be completed before the end of the year.

Current accounts and savings account documents will be renumbered. This change, however, will not affect direct debits, transfers or payments received. Therefore, it will not be necessary for customers to make any arrangements. Existing contracts for loans and mortgages will also maintain the agreed terms and conditions.

Bankia cards can be used until the user activates the CaixaBank card they will receive at home, following the integration of IT systems.

In addition, as of today, all CaixaBank and Bankia customers will be able to make debit withdrawals with their cards, free of charge, at the more than 14,000 ATMs across the joint network in Spain that both banks will offer after the merger.

Gradual replacement of the Bankia brand

The merged entity will maintain the CaixaBank brand and, having completed the legal merger, the Bankia brand will be replaced at branches and other landmark buildings.

The brand transition process will be gradual, but will begin during the first days of integration, with the process of replacing signage on landmark buildings expected to be completed within the next week. The replacement of signage in branches will also begin at the same time and will continue for several weeks.

Digital channels (web, mobile and ATMs) will be customised to incorporate CaixaBank’s image with Bankia’s until full technological integration has been completed.

New Board of Directors and new Management Committee

The Board of Directors will consist of 15 members, 60% of whom will be independent. Women make up 40%.

As indicated in the merger plan, the combined entity resulting from the merger will be chaired by José Ignacio Goirigolzarri, current chairman of Bankia, once he is appointed by CaixaBank’s new Board of Directors, which is scheduled to meet in the coming days.

The current CEO, Gonzalo Gortázar, will continue as CaixaBank’s chief executive, reporting directly to the Board of Directors and overseeing the Management Committee.

In addition, at its meeting on 18 February, the CaixaBank Board of Directors proposed a new composition of the Management Committee. This proposal will have to be approved by the Board of Directors at its first post-merger meeting.

The Management Committee also proposed a new Regional Divisions structure which, in turn, will also be submitted for approval to the new Management Committee formed following the merger with Bankia. Under this new regional reorganisation, CaixaBank will be geographically divided into 14 regional divisions

ACCIONA, recognized as the greenest electricity utility in the world for the third year running

CAF closes the acquisition process on the Polish firm Solaris